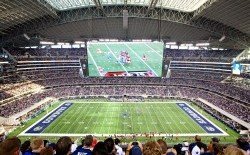 The HD video screen at Cowboys Stadium has captured global interest as the largest high-definition TV screen in the world. It even holds a Guinness World Record. The 600-ton scoreboard, developed by Mitsubishi Electric Diamond Vision Systems Group, extends from one 20-yard line to the other. Prism Electric provided conduit, cabling and electrical connections for the giant center-hung screen.

Prism Electric also provided electrical services when the entire structure was raised for the U2 360° Tour, a worldwide concert tour by rock band U2 that is named after the 360-degree staging and audience configuration it used for stadium shows. Prism’s service division is onsite at every stadium event for immediate electrical services.

Building on the success of the Cowboys Stadium project, Prism won a similar project for Consol Energy Center, the new home of the Pittsburg Penguins hockey team. Completed in fall 2010, the facility includes a main scoreboard that stretches from blue line to blue line as well as auxiliary matrix screens, all created by Mitsubishi Electric. Prism provided electrical connections for that system.